Panch Pokhari is one of the new famous tourist destinations of Nepal. It is a popular destination for nature lovers and Hindu and Buddhist Pilgrims. Panch Pokhari is named after the five Hindu holy lakes situated at the base of Jugal Himal in Sindhupalchowk District. The fresh and alpine water source of this lake is the Indravati river. It is the 9th altitude wetland in the world, situated at an elevation of about 4100m above sea level. Panch Pokhari is a relatively little-known and best-kept secret of nature. This pokhari feels like a part of heaven as it has incredible beauty and mesmerising sceneries.

This lake is a popular destination for trekking pilgrimage shrine next to Gosainkunda during the festival of Janai Purnima. Due to its religious importance, Panch Pokhari is regarded as sacred ponds. Mostly local people visit this lake in Janai Purnima wearing traditional clothes. Jhakri naach conducted during Janai Purnima is the major attraction of Panch Pokhari.

This beautiful lake lies in the north of the Kathmandu valley. This trek provides you a beautiful Himalayan view of Gauri Sankar , Dorje Lakpa, Langtang , Rolwaling and jugal Himalayan range and many other snow capped ranges.

Panch Pokhari is the best escape from the hectic and busy life of the city area as it is one of the most beautiful places in the world. It is one of the nearest getaways from the Kathmandu valley as well.

Panch Pokhari is at an elevation of 4100m above the sea level. It is the 9th altitude wetland in the world where birds can be found. It is considered a moderately complex trek. Due to high altitude, non trekkers may face the problem of altitude sickness during the trek.The temperature of this area is mostly cold throughout the year. 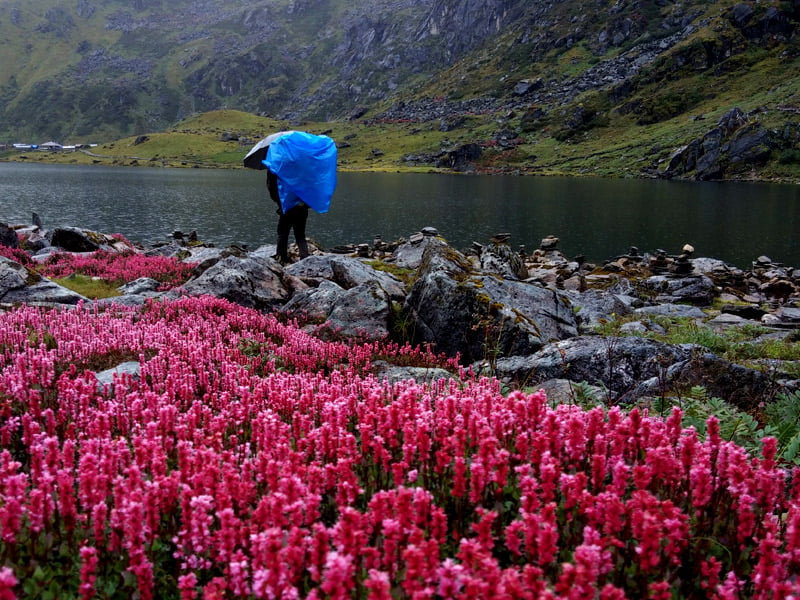 Panch Pokhari trek overwhelms you with the pleasing panoramic mountain view. You will never be fed up with the captivating view of this area. Moreover, the alluring view of Dorje Lakpa, Phurbu Chhyachu, Langtang, Rolwaling and Jugal Himal can be espied from this place.

Camping refers to an outdoor activity that involves staying the night in protective shelter like tents out in nature. Mostly, people go camping to escape the nuisance of urban life to a natural environment.

Panch Pokhari offers you the best camping sites at the base of the jugal Himal , surroundings full of beautiful flora and fauna as well as beautiful mountain views full of adventure. This place is an incredible escape into nature.

There are many breathtaking non-famous trekking trails in Nepal, Among which Panch Pokhari hiking and trekking are one of them. This hike provides you with the most beautiful mountain views and different types of flora and fauna. This trek has two trials in which one starts from Sano Okhareni via chautara, and the other one starts from Bhotang via Melamchi. A trial from bhotang is considered an easy trial compared to Sano Okhareni.

The best time to visit Panch Pokhari is during September and October in Autumn and March and April in the spring season. September-October and March-April are considered as the best seasons for Trekking in Nepal. People also visit during Janai Purnima festival so if you want a religious tour to this lake you can plan accordingly and go on the full moon in August. However, If you want to visit the place during snowfall, you can plan your trip in the winter. Hence, Autumn and Spring are considered the best seasons to visit this lake.

Panch Pokhari trek is one of the moderately difficult trek that lies in the base of jugal Himal at Langtang Helambu region.This trek is relatively in shade, so there are no proper accommodation facilities. You have to carry your things yourself to the higher elevation. Only a few tea houses are present in the lower region of this trek.

Due to high altitude and heavy camping bags, you may face difficulties during this trek and have high chances of altitude sickness. So, taking precautions and basic medicines would be helpful during this trek.

Trekking during Monsoon season may bring problems due to heavy rainfall, which may cause landslides.

Similarly, panch pokhari trek during winter is also considered as difficult trek due to the heavy snowfall in this region.

Chitlang Hiking and boating near Kathmandu